Aaron J. Brown, a community college instructor and proud native of Hibbing, Minnesota, says some on the Mesabi Iron Range seem to have forgotten that they are the descendants of immigrants. A century ago, Hibbing was as diverse as New York City is today. “Many great-great-grandparents of Hibbing residents came from another country,” he says. “If you read our newspapers from a hundred years ago, it sounds just like the same arguments against immigration that you see now, the same amount of stereotyping and the same amount of villainization you now see in the press. It’s just that in that case they were talking about our ancestors!” 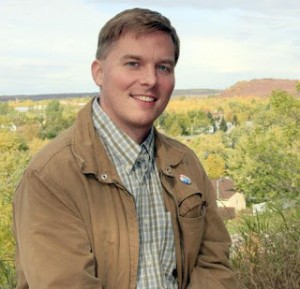 Brown, an author and radio producer who teaches public speaking, wishes the broader community could see how rich the melting pot can be. Since college and adult learning programs in Minnesota’s urban areas tend to fill fast, the overflow population of motivated learners from South America and Africa end up in more rural areas, like Hibbing. “The more consistent jobs in this area are in the healthcare sector,” Brown explains. “There are a number of new immigrants and first-generation immigrants who work in our healthcare facilities.”

Having a practical and fair system to attract the most talented people is what everybody wants in their small town or city.

This is true across the United States, especially in rural areas, where doctors can be hard to recruit. According to research by New American Economy, in 15 separate health sector occupations, vacant jobs outnumber unemployed workers by more than 10 to 1. Overall, immigrants make significant contributions to the places they settle. In Brown’s congressional district, in northeast Minnesota, immigrants comprise only 1.6 percent of the population; still, they pay a combined $66.8 million in annual taxes and 300 of them run their own business, making them likely job creators for other residents.

Brown thinks many Americans would see their immigrant neighbors differently if they knew about these contributions. And, of course, if they were able to interact on a more personal level. “I’ve actually worked with immigrants in my work,” he says. “And I don’t think that’s true of most people who live here. . . .  Those people don’t know them and then assume the worst when they see them.”

Brown says that “almost everybody here in America once was somewhere else.” He’d like to see immigration reform that recognizes the contributions newcomers make to our towns, with policies that welcome immigrants — especially when they’re filling badly need gaps in the workforce. “Having a practical and fair system to attract the most talented people is what everybody wants in their small town or city,” he says.