In an interview on Fox Business News, Partnership member Jonathan Johnson, president of Overstock.com, makes the economic case for legal immigration reform and the need to remove federal caps on visas for highly skilled foreign-born students, inventors and entrepreneurs: “In my view, when we bring these people on and give them visas that allow them to work here, we’re creating jobs and just as importantly we’re not creating competition back in their homelands that are going to hurt our businesses and wind up reducing jobs.”

Johnson also discusses the need to allow more foreign-born graduates of U.S. universities with advanced STEM degrees to remain in the United States, citing recent studies sponsored by the Partnership for a New American Economy detailing how highly skilled immigrants create jobs for Americans and noting that 76 percent of patents produced by the country’s top ten patent-producing universities have a foreign-born inventor. 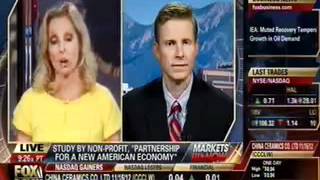